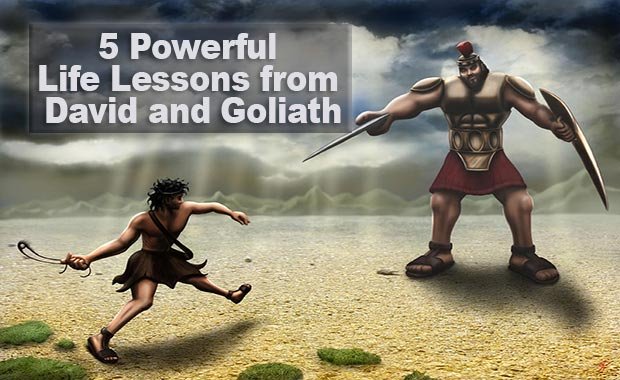 There are 5 powerful life lessons from David and Goliath you can learn from and how they relate to almost any situation.

Here are the 5 life lessons from David and Goliath:

1. Be bigger than your fears

Twice a day for 40 days Goliath would challenge the Israelite’s demanding a 1 on 1 battle. All the Israelite’s were as terrified as a Lions prey on the verge of death. None of them would dare to challenge Goliath. But after David heard about the reward for defeating Goliath, he accepted the challenge as if it were nothing but a child’s game.

When David confronted Goliath who had armor and a javelin, all David had was a staff, sling and 5 stones. Not to mention he was like a baby in size compared to Goliath. But did that stop him? Yeah right. Not long after the battle started, he pulled his sling back with a stone attached to it then he let it rip right into Goliath’s forehead!

Killed him in the process. If that happened to be any of the other people around him, they would have ran in the other direction and backed down, because the Israelite’s were smaller than their fears, and David was bigger than his fears…

If you’re not, you’ll end up settling for the things that are LESS than your fears….And you’ll be enslaved by your fears no matter what situation you’re in or what decision you need to make. Look at things logically, look at the facts, get out of your head and take action already!

“Thinking will not overcome fear but action will.” – W. Clement Stone

In life you’re bound to come across big challenges, small challenges, tiny challenges and enormous challenges. But the size of the challenge, problem or obstacle is Irrelevant. Why? Because that doesn’t determine what’s possible for you.

The only thing that determines what’s possible for you is YOU, your mindset and your beliefs. If size mattered to David (as it did with the Israelite’s) he wouldn’t have had the courage to take on Goliath. Especially with just a staff, 5 stones and a sling.

David knew size doesn’t matter, it’s HEART, COURAGE, and COMMITMENT that matters. You can apply the same principle and same level of thinking to your life and the challenges you’re facing. Think bigger than the challenge, be bigger than the obstacle, and act as if it’s impossible for you not to fail. Have self confidence, conviction and believe in yourself MORE than you believe the challenge is too big to handle.

3. Make use of what you already have

Many people complain about:

But the truth is you have to make USE of what you’ve already got to get what you want. Compared to the armor and the weapons Goliath had, David seemed insignificant. After all he only had a sling, 5 stones and a staff (Even though he turned down armor that was offered to him).

Yet he made use of it and it happen to be more than enough to get the job done. He still defeated Goliath regardless of the comparison in weight, strength, Armory, weapons, etc. David didn’t moan or whine because of the differences like the Israelite’s would have. He had a “so what?” attitude and left everyone in shock after defeating Goliath so effortlessly. With nothing but a sling and a stone.

You want to start a business? Improvise and use what you already have. Want to start singing? Record through your phone If you’re not ready for the studio. Want to make YouTube videos? Record videos through your phone instead of complaining about needing expensive equipment. Want to be a graphic designer? Watch tutorials on YouTube instead of moaning about not having “Photoshop” yet.

But on the other hand, David’s belief would have been at least an 8 or more. That’s why it wasn’t an issue for him to challenge Goliath head on and even take him down. And don’t forget David turned down the offer for armory, which proves he strongly believed it was possible.

Do you believe it’s possible?

Without a strong belief that what you’re pursuing is possible, you’ll fail. You’ll quit on yourself before you even get half way. Think of it like the guy who’s too afraid to approach the girl he likes. How come he won’t approach her? His self belief isn’t strong enough, so he quits on himself without making a move.

If your fears are stronger than your self belief and faith, you’ve shot yourself in the foot without knowing it. Until you believe in yourself more than the fear or the obstacle, you’ll continue to quit on yourself.

“In order to succeed, we must first believe that we can.” – Nikos Kazantzakis

But the outcome of the battle turned out to be a lot different than the Israelite’s expected. David didn’t underestimate his abilities or himself. He had self confidence and lots of it. He was smart enough to know that he was more than capable of succeeding.

It doesn’t matter If: You’re a writer, a pianist, plumber, real estate broker, personal trainer, musician, parent or college student; You’re capable of much more than you believe. You’ve just yet to see it because you haven’t given yourself the chance to.

If anything you should be overestimating, because then you’ll end up giving and doing more than is expected and you’ll end up achieving more and reaching your potential in the process.

“It is always dangerous to underestimate anybody.” – Abdallah II of Jordan

Thank you for reading this article! Which of these 5 life lessons has helped you the most?